With Alfa Romeo in F1 once again and ground-effect cars making a return next year, we thought there was no better time to reunite Bruno Giacomelli with his 1980 Alfa Romeo 179 Formula 1 car 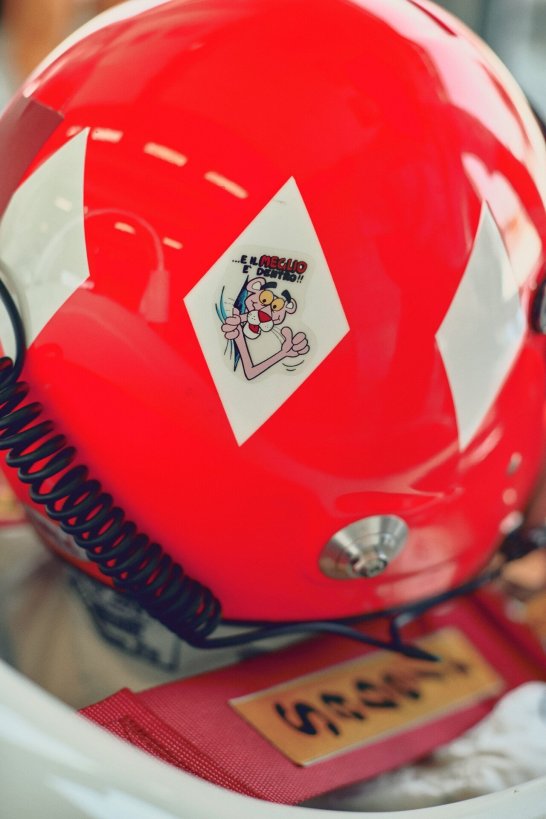 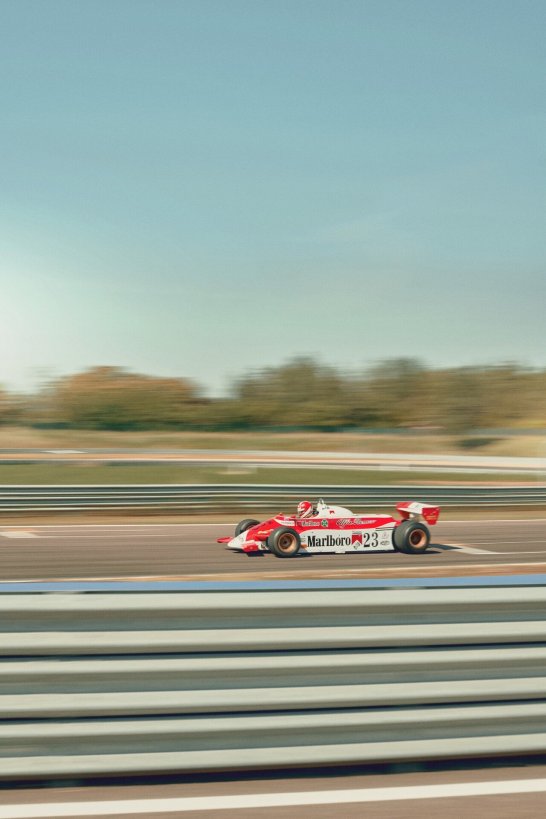 It seems history is set to repeat itself in 2022, as regulation changes in Formula One herald the return of one of racing’s dark arts: ground effect. Not only that, but since 2018 we now also have a pair of Alfa Romeos on the grid, lending next season some similarities to 1980, in which Bruno Giacomelli raced in this very car – the Alfa Romeo 179 – which is available for sale with Kessel. To give the car a bit of a shakedown and ensure everything was running smoothly, Ronnie Kessel headed to the track, and who better to help than Bruno himself!
Ronnie has a fair bit of on-track experience himself, having raced in the Ferrari Challenge series and even behind the wheel of his family’s 1977 Ensign N177 F1 car, but never behind the wheel of a V12 Grand Prix racer. We thought he would be the perfect man to relay the emotion and excitement of a very special day at the track. 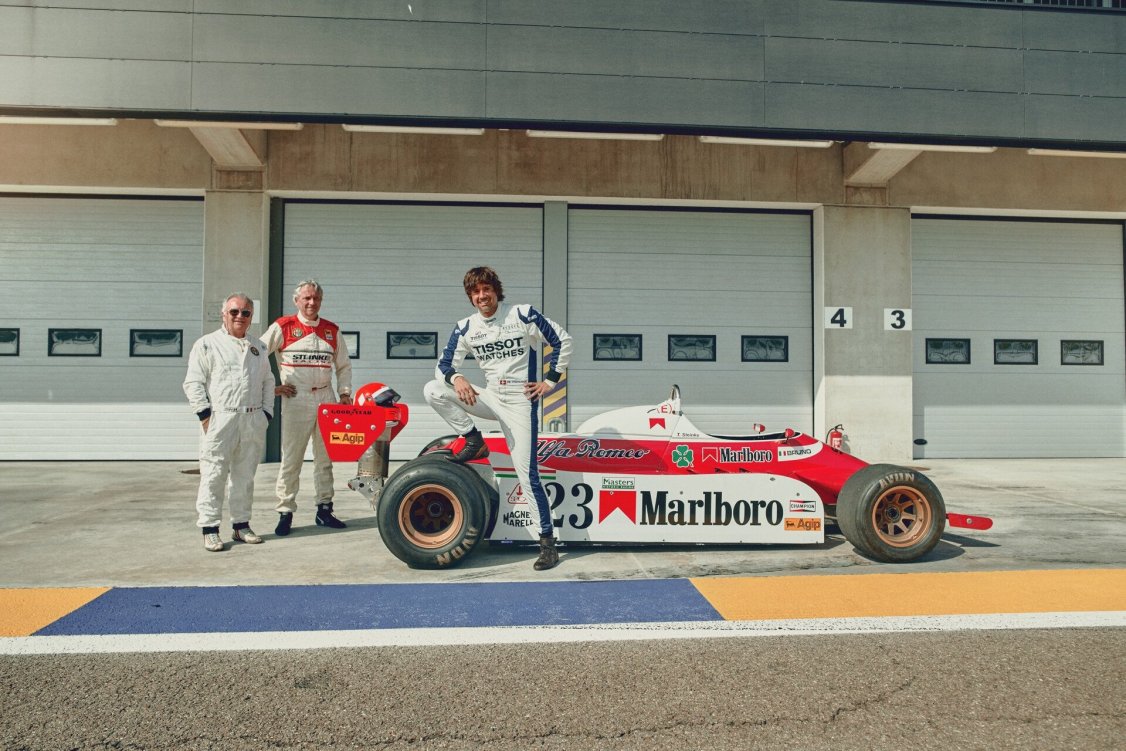 Ronnie, thanks for chatting with us today, that must have been quite the experience!

“It really was. I had some expectations based on driving my father’s Ensign car, but that’s an eight-cylinder. This Alfa is a 12-cylinder and it’s a rocket – it screams! The way it accelerates is really exciting, I have never experienced a 12-cylinder symphony like that before and it was honestly mindblowing. However, by far the best experience was being able to welcome Bruno back to the car he raced in period. The entire chassis was built around Bruno, and you could really sense that.” 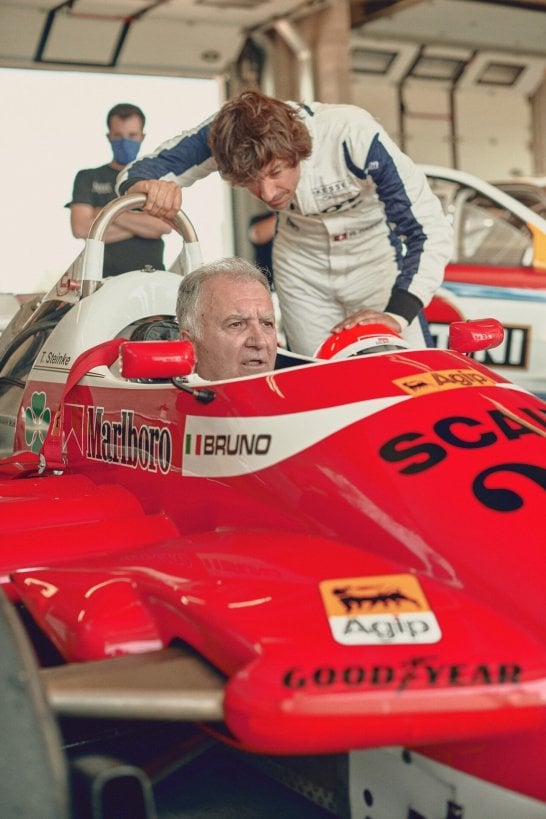 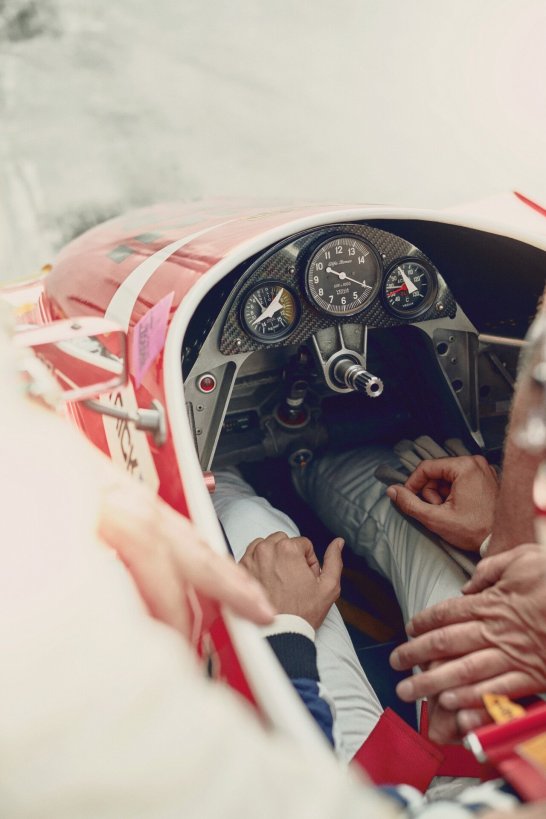 You’ve done a fair bit of racing yourself, how does it compare to the fastest cars you’ve driven?

“I have always been a fan of Alfa Romeo; we have a 155 DTM which I love. This 179 has an Alfa badge, but it’s so extreme that it’s totally removed from normal cars. However, from the sound you can definitely sense the passion that gives away its Alfa DNA.

“Even compared to my 488 Challenge car, it’s definitely on a different planet. The 179 is more demanding and requires more focus, because every little error could be fatal. You’re going the same speed roughly as the Challenge car, and faster than they were in the ’80s, because tyre compounds are much better. You have to have much more respect for the F1 car. It’s like playing with fire and it makes you understand why F1 was so popular back in those days. It was like a circus, and the drivers were like stuntmen risking their lives for the enjoyment of the spectators. You don’t go to a circus if there’s no show, and back in the day they delivered a serious show.” 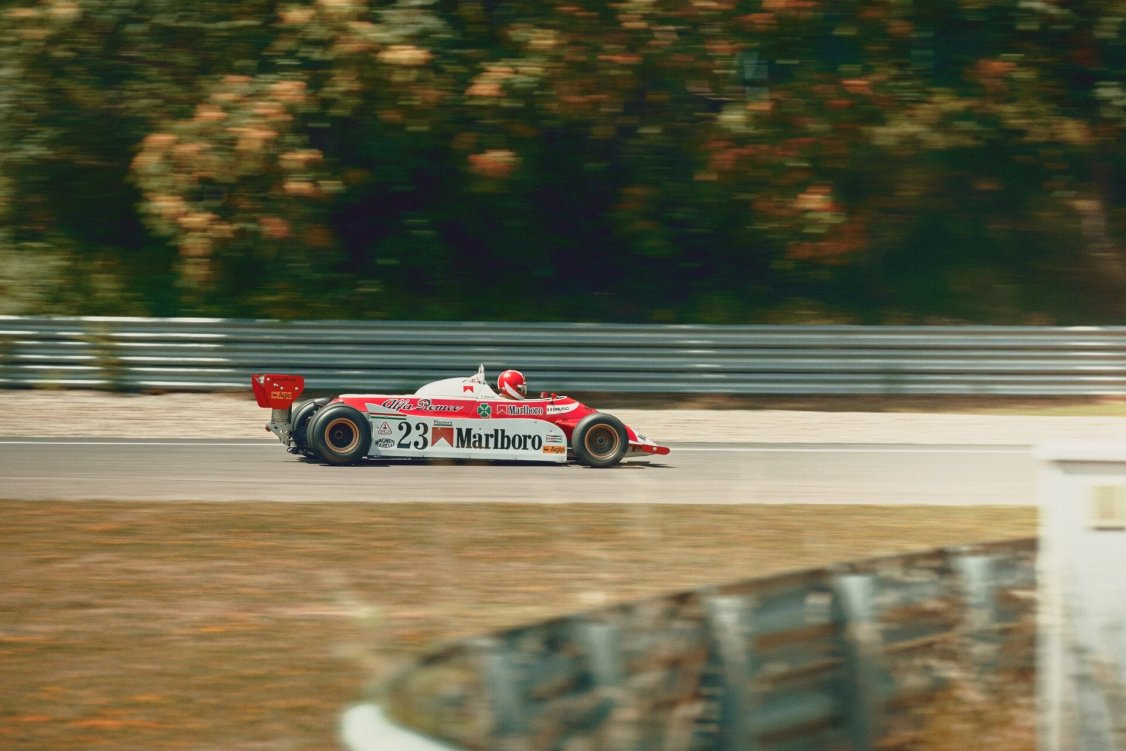 Is there something modern F1 can learn from this era of racing?

“I think that modern F1 cars are much safer machines, which is what really matters. To make the competition safer, they have had to apply different rules, which changes it compared to the ’80s. However, there are pros and cons to both eras. In the ’80s, there truly was more noise, more chaos, and more excitement, but also unfortunately more fatal crashes. Today it’s less noisy, it’s more organised, but fortunately it’s much safer. It would be really nice to see Kimi Raikkonen or Antonio Giovinazzi driving an ’80s F1 car, and Bruno a modern F1 car.” 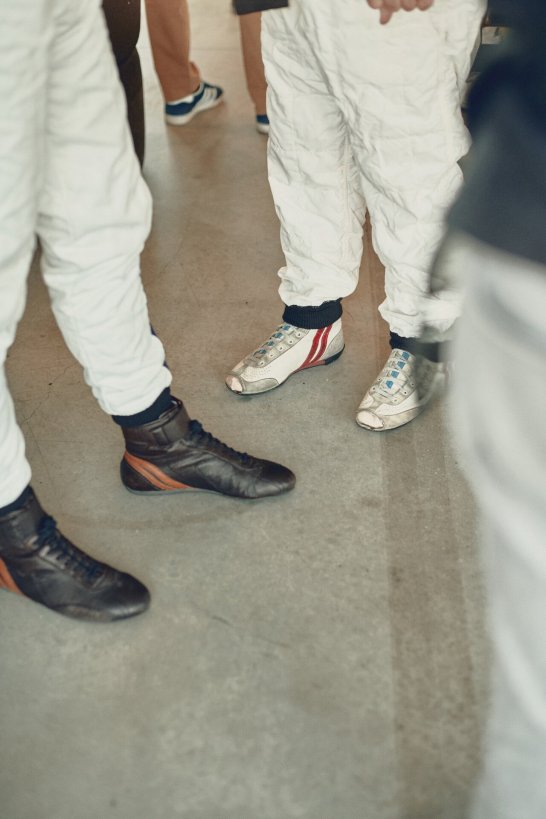 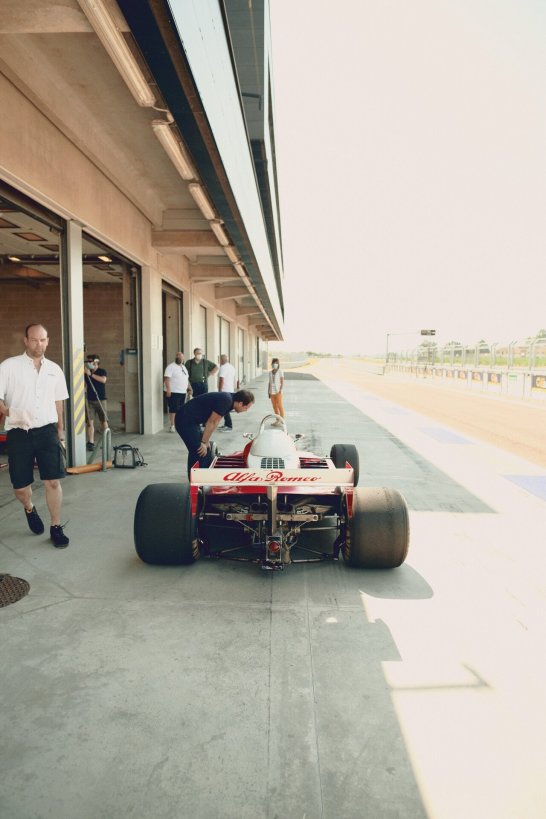 I would love to see that comparison! What was it like to see Bruno at the wheel again?

“It was like sitting on the pitwall on a Sunday in 1980. The way Bruno was driving the car, the way he was heel- and-toeing and downshifting, it was just incredible to watch. You could hear and understand that there was a real connection between him and the car – he was able to make it do whatever he wanted.

“Back in the day, Bruno used to race with the toes of his shoes cut off so he could get a better feeling, and as you can see he still has that habit! Seeing him in super-good shape, and being able to talk about what it was like to race the car in period and battle against other drivers of the era was a really special moment.” 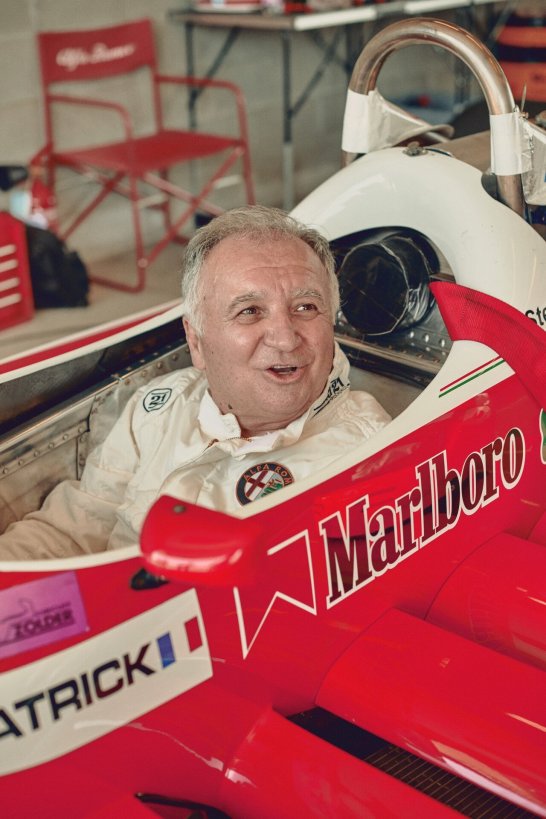 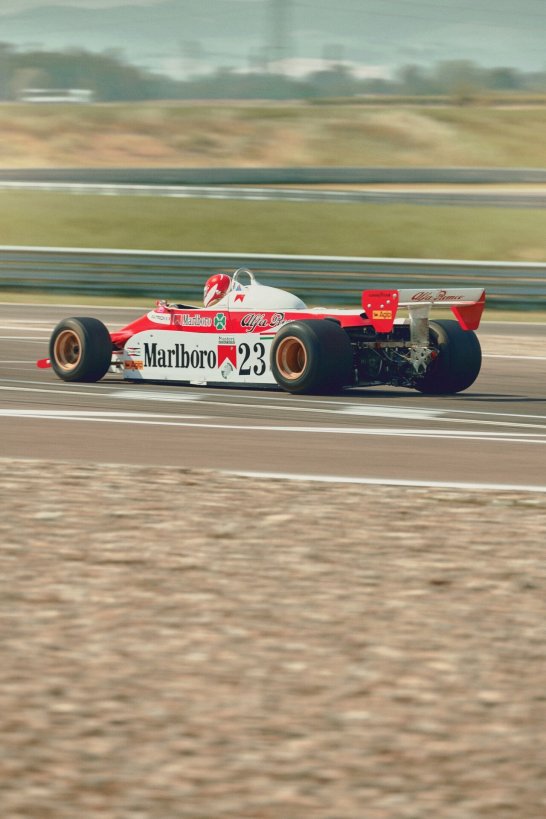 I can imagine that, but who’s faster, you or Bruno?

“Bruno without a doubt. I was expecting it, but I was hoping I might be closer to his pace. However, the way he gets the car to dance around corners, his gentle touch when downshifting and upshifting is spectacular. Compared to Bruno, listening to me in the car was like hearing a brawl, but the way Bruno moved through the gears was like a dance. What is sensational was Bruno himself being back after 40 years and seeing him smile enjoying driving the car.” 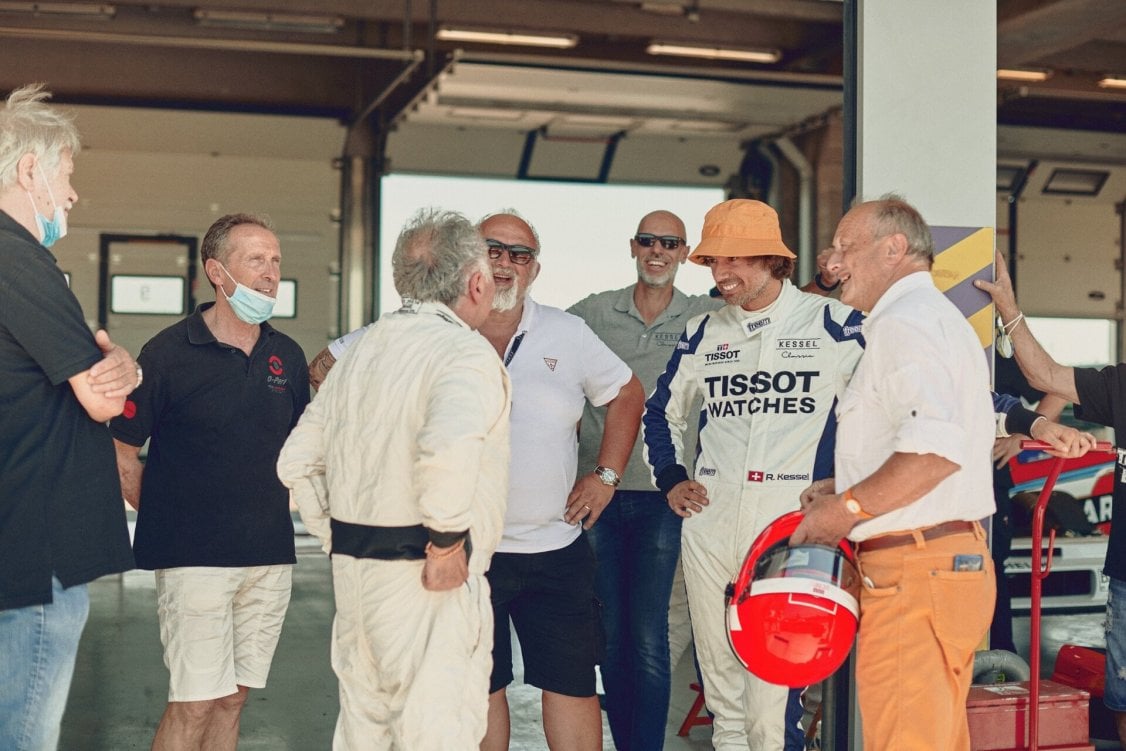 Tell us a bit more about the car, what was its history after its time in F1?

“This chassis has been very active in F1, because it obviously competed in 1979 and 1980. It was then sold to a driver-collector who did a lot of racing like Goodwood, Monte Carlo Historic and Masters Historic Formula One. It has been driven since it retired, in total it has been in the line of duty for over 40 years, which is great. Time goes by, but these iconic unicorns are always going to be around. Recently it was fully restored and the engine has been completely overhauled – it’s ready to compete in the next race the new owner might want to enter.” 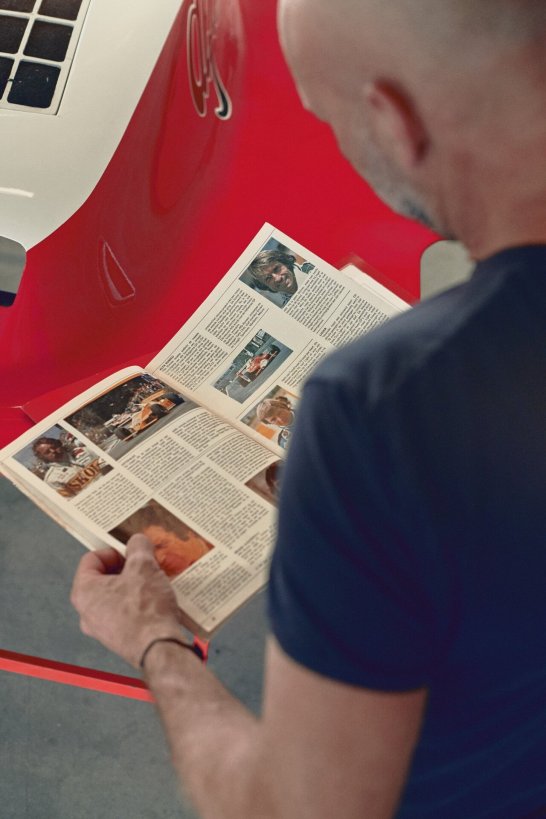 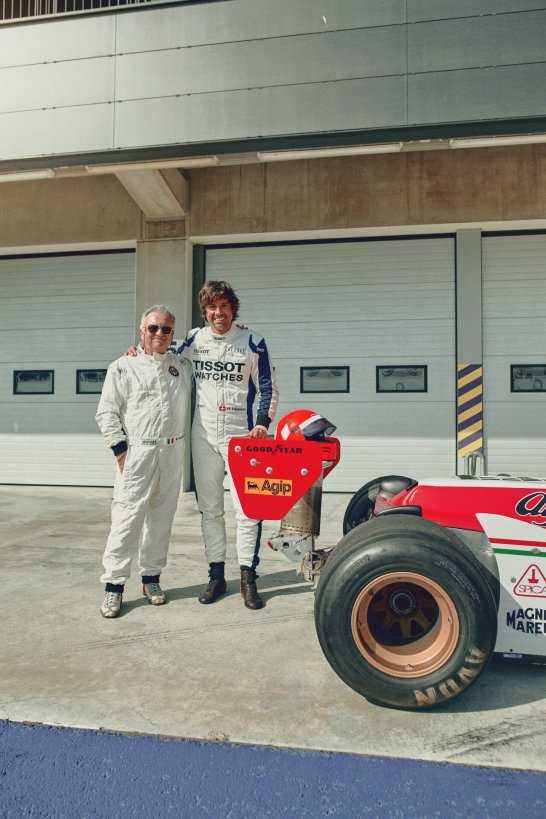 Thanks very much, Ronnie. To end, let’s hear from Bruno Giacomelli himself:

“It’s not every day I get to drive an F1 car that I drove in those years, so as you can imagine it was a great feeling and should happen more often! When I sat in the car, it was like sitting on my couch at home – I developed that entire car from the gearshift to the seating position. It was a thrill beyond belief and I hope it happens again very soon!”