Exactly how a pitstop operates varies wildly from series to series. Whether the regulations allow refuelling, how many mechanics are allowed to work on the car and how many pitstops normally occur all determine the cost, or benefit, of stopping.

For fans who are very used to one series' way of doing pitstops, other regulations may seem odd. Here's the rundown of how many of the biggest series do it, and the affect the pitstops can have on the race itself.

NASCAR has some quite strict rules surrounding pitstops. As of 2018 only five mechanics are allowed to go over the wall separating the garages from the pitlane and work on the car, and the entire crew can only number 17. Of the five who work on the car during the stop, two act as tyre changers, one carries the tyres, one fills the car up with fuel and one is the jackman.

With such a minimal team first the right tyres and then the left must be changed, which is time-consuming, as is that each wheel contains five lug nuts, rather than Formula 1's one.

The car must be fully in its pitbox before the mechanics can jump over the wall and they must also only use the prescribed NASCAR approved tools, which are not allowed to be modified so that no team can gain an unfair advantage. If the driver does not park in the right spot, or if they drive off before all the used tyres are brought back over the wall, time penalties will be incurred.

For a car to be refuelled and all four tyres changed a good stop is around 12 seconds long. NASCAR teams often recruit ex-professional or college level athletes as the mechanics who perform the pit stops so that they have the strength, stamina and agility to perform the stop as quickly as possible.

The Xfinity Series and Truck series races that do not accompany the Cup events will have different, more complicated, rules surrounding pitstops, designed to create different restart scenarios and promote a level playing field.

There are only eight crew members with six that are allowed to go over the wall and under the green flag only fuel can be added during a pitstop. Under yellow flags drivers won't lose position when pitting as long as it is completed during the designated time period. During this time teams can add fuel and change two tyres per stop on ovals and on road courses teams can add fuel or change four tyres.

At the restart the cars line up in order of those that did not pit, then those that pitted once, pitted twice and finally cars that are under penalty. Performing services on the car at the wrong time results in a two-lap penalty.

Like NASCAR, IndyCar teams are also restricted in the number of crew members they are allowed to send over the wall, with only seven crew members working on each car, one filling the car up with fuel, four changing the tyres, an aeroscreen attendant and someone operating the pneumatic air-jack system to lift the car up.

The aeroscreen attendant can only work on the car when the rear tyres are elevated and must immediately go back over the wall when their task is complete.

The pitcrew is allowed to go over the wall one lap before the car comes in to get set and even with the limitation on number of crew members a typical stop where all four tyres are changed and approximately 84 litres of fuel is added takes under ten seconds. 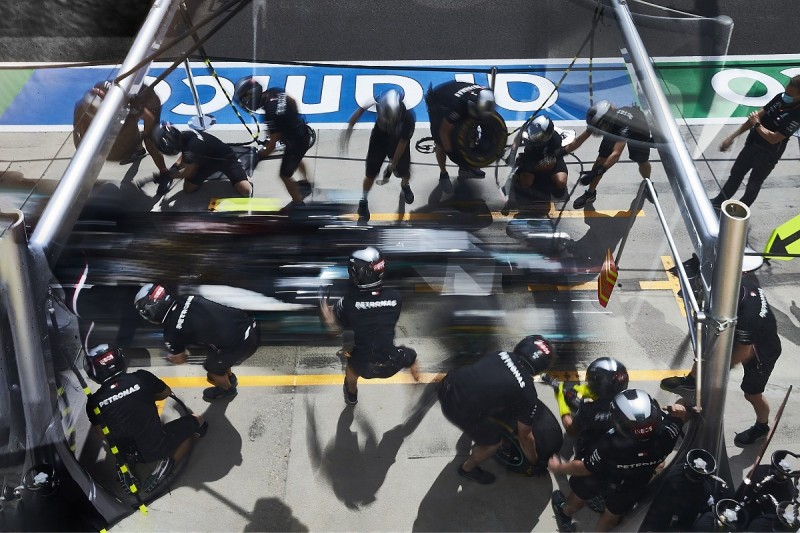 F1 pitstops differ from their American counterparts in two significant ways. Firstly, refuelling has been banned in F1 since 2010 on both safety and financial grounds. Without refuelling pitstops are quicker and safer with less risk to the driver or the mechanics. The other key difference is that there is usually around 20 mechanics working on a car during a pitstop, again speeding up the tyre changing process.

Each wheel has three mechanics assigned to it, one with the wheel gun, one to take the tyre off and one to put the new tyre on. This means that all the wheels are serviced at the same time, saving vital time that can very much make a difference to a driver's track position. There are also two mechanics who act as stabilisers for the car, as well as front and rear jackmen and people on stand-by with fire extinguishers.

Without refuelling and with so many mechanics allowed in the pitlane the average time stopped in F1 is a mere 2.5 seconds, losing far less time in an average stop than in many series. As it is mandatory (unless it is a wet race) for each car to use at least two different tyre compounds in each race, every car must make one pitstop.

Most strategies involve pitting once or twice, although accident damage, excess tyre wear and mechanical issues can all cause extra pitstops.

During an endurance race the cars require much more maintenance to go the distance. As the conditions of a race changes, especially the difference in temperature from day to night in 24-hour races, alterations must be made to the aerodynamics of the car. The pitstops tend to be considerably longer in endurance races, especially when a team changes driver or has to make significant repairs.

The World Endurance Championship allows a maximum of 11 personnel to work on the car in the pitlane of which include a car controller, a fire extinguisher attendant, a refueller, a cut-off valve attendant, a driver attendant, four mechanics and two technicians. With around 27 stops per car in a 24-hour event, the time spent in the pitlane is an important part of the race. The Porsche #2 car that won Le Mans in 2017 spent 98 minutes in the pits out of the 24-hours.

In the World Touring Car Cup it is not mandatory for the cars to pit during the race and refuelling is not permitted during any session so stops are just to repair damage incurred. Like in most series, crews are only allowed into the pitlane immediately before working on the car and must leave as soon as they are done. Only five people are allowed to work on the car throughout the event, again limiting the speed of repairs.

Pitstops are also purely for repairs in the British Touring Car Championship, where a maximum of eight personnel work on a one or two car team, with that number doubling if there are more cars. During a pitstop there must be a car controller waving the car safely in and out of the box, an air jack operator and no more than four mechanics changing the tyres at any time.

Since the move to the Gen2 car at the beginning of the 2018/19 season, Formula E cars have been able to go the whole race distance without running out of energy. Prior to that drivers had to swap to a second car midway through the race in order to be able to make it to the end, with a minimum stop length at each race to ensure that teams and drivers did not endanger themselves or others by rushing and compromising their safety.

The Gen2 car has almost double the energy storage capacity of the original and double the range meaning that pitstops are only necessary for repairs. There have however been discussions about reintroducing pitstops at the next regulations change to include rapid recharging, an issue that if solved could have a big impact on the electric vehicle industry.

Pit stops play an important part in the feature race of each Formula 2 weekend, with the use of two different tyre compounds mandatory unless the event suffers bad weather. Like in F1, teams base their strategy around the timing of stops and selection of tyres although again refuelling is banned.

The mandatory stop cannot take place until six laps into the race and only six mechanics can work on the car during the stop, plus someone in charge of stopping and releasing the driver.

A five-second pitstop is regarded as good, making F2's stops a couple of seconds longer than in F1 but with significantly less personnel involved. While Formula 3 are also allowed only six people working in the pitlane, the teams in that series are only allowed to change tyres during the race if there is a clear safety reason for doing so, such as in the case of damage or a puncture. 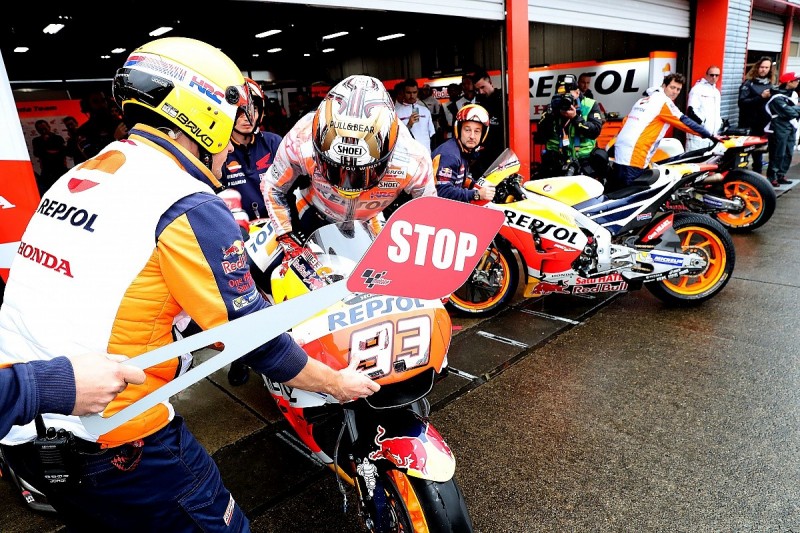 While MotoGP riders do not routinely stop during a race, they can come in to swap to a bike set up with wet weather tyres if the weather conditions change. This, however, is a relatively race occurrence, so both the mechanics and riders are not as polished at it as in some other series, although teams are given time to practice bike swaps each race weekend.

Only five mechanics are allowed in the pitlane during bike swaps, although eight are allowed for practice sessions and six for qualifying, when pit stops are frequently made to tweak the bikes.

Pitstops do not occur in rallying in the traditional sense, but like in circuit racing there are opportunities for the cars to be checked over by the team and for repairs to be made.

The cars return to the service park several times a day across the event, with usually a 15-minute service first thing in the morning, for 40 minutes at the midday break and for 45 minutes at the end of the day.

Teams are limited to this much interference, with the driver and co-driver being left to make whatever repairs they can during the rest of the day on the go. This means that the crews must be competent mechanics as well as drivers or co-drivers.

Even within the service park the crews are limited to only eight mechanics for teams with two cars, or 12 for teams with three cars. The teams are restricted in supplies and can only use a certain amount of parts and if a car sustains structural damage they are forced to retire it. Over the course of the gruelling events the cars often pick up a wide range of damage that the team have to work to fix and keep their drivers on the road.

V8 Supercars work on a slightly different system to most racing series by making use of multiple compulsory pitstops, with the number of stops and the amount of fuel to put in and tyres to change differing from race to race.

If a driver does not complete their stops correctly, or if they are unable to due to the race being suspended then a penalty is added to their overall race time.

Eight people can work on the car in the pitlane, which are made up of a car controller, an air jack operator, a refueller, a fire attendant and four other mechanics working on various parts of the car.